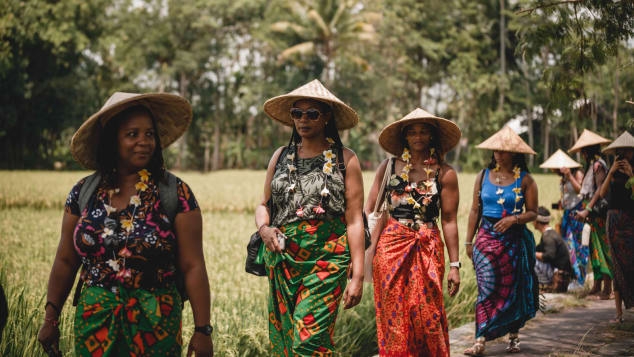 How the black travel movement is gaining momentum

Guest User
2422 Views
CNN) — Fed up of constant job rejections, 29-year-old Craig Kingston decided he need to do something drastic.
So the South Florida native quit the nine to five role he hated, booked a one way ticket to Vietnam and sold all his stuff.
But he wasn't quite prepared for the attention he'd receive once he made the move to the Southeast Asian country.
"One of the biggest things I face being black and abroad, especially in Vietnam, is the staring," he tells CNN Travel.
"There aren't a lot of black people in Vietnam compared to Thailand and Malaysia, so people stare at you to a point where it becomes uncomfortable.
"I literally saw someone almost get into an accident on their bike staring at me."

Travel Noire provides access to resources that cater to the needs of travelers of color.
Courtesy Travel Noire
In some respects, the reactions he got weren't surprising. The assumption -- for some anyway -- is that black people don't travel.
According to Mandala Research Firm, 17% of African Americans take one or more international trips and travel locally more than six times per year.
However, travel publications often paint a picture of a stereotyped Western tourist usually gazing at the horizon from the edge an infinity pool.
"If you look at major campaigns or advertisements for travel -- especially luxury travel -- you don't see brown faces," says Marissa Wilson, general manager of Travel Noire, a media company founded in 2014.
"That causes an issue because, psychologically, it makes those people feel like this isn't made for them.
"Like they're not supposed to be traveling. We wanted to infiltrate that narrative and flip it on its head."
Besides addressing the under-representation of travelers of color, Travel Noire aims to challenge limiting beliefs around the accessibility of travel while providing access to resources that cater to their needs.
This means a big part of its work involves curating imagery of black people traveling across the globe.
"We were amazed at how hard it was to find a community of travelers who looked like us, much less find high-quality images or stories about them online," Wilson says.
"Travel Noire created a space for people of color to see themselves in the travel industry; by curating beautiful images, by placing people all over the world, and by making the travel industry a space that was for us."

The brand's main aim is to make travel more accessible for people of color.
Courtesy Travel Noire
But this is about a lot more than just images.
With nearly five million black millennial travelers in the US (this group spent at least $63 billion there in 2018), there's a huge business opportunity for brands that successfully cater to this market.
"There's a lot of disposable income being spent on international travel but also a lot of people that aren't being catered to in the travel industry," says Simone Ashley White, associate director of business development for Blavity, Inc. (the parent company of Travel Noire).
"The goal is to push people to travel even more and also to work with the countries they're traveling to.
"We're partnering with tourism boards to think about how we tell that story, how we bring more dollars to different countries, and how we reach black travelers where they are."
Travel Noire has invested heavily in its online presence in order to reflect the digital world we live in.
The brand reaches over a million people on social media, and also produces a newsletter that goes out to more than 150,000 people every day.
"We often work with influencers for marketing campaigns as well as curating our own city guides," White says of its custom itineraries, which provide actionable content for over a hundred destinations worldwide.
"We want people on the ground experiencing these things. That's important, because we know we can't tell you what's happening in other countries day to day from the US."

Black millennial travelers in the US spent at least $63 billion in the country in 2018.
Courtesy Travel Noire
The goal is to work with local tour companies and businesses, while also partnering with content creators and online influencers as major players in the travel movement.
Given that the most popular destinations span all parts of the planet, from Cape Town to Colombia, Bali to Barbados, and Ghana to Greece, this can be challenging at times.
"For destinations throughout Africa and the Caribbean, there's a keen interest in landing in a place that has a significant population of black natives," says Wilson.
"Apart from these spaces being absolutely beautiful, there's a sense of connection, comfort, and excitement in traveling to places where a huge part of the population looks like you.
"And for destinations throughout Asia and Central/South America, I think there's a huge curiosity for what life is like for locals."
Kingston made his move to Vietnam over a year ago and says he has no plans of returning to the United States.
"There's nothing there for me," he admits. "Why go back to work another dead job because I don't have eight years of experience with my degree for most high paying positions, when I can live life, be happy, and travel the world?"

Travel Noire curates imagery of black people traveling across the globe in order to address under representation.
Courtesy Travel Noire
Travel Noire helps to share stories like Kingston's by inviting its audience to write about their travel experiences, whether it's about becoming fearless in Thailand or finding peace in Japan.
"Overall, black travelers are interested in going to destinations they are curious about; where they feel a sense of connection, an opportunity to be challenged, and have the chance to step outside their comfort zone and be transformed," Wilson says.
"And, just like every other group that travels, they want an opportunity to get away from everyday life and enjoy everything the world has to offer."
Travel Noire is building on its digital success -- it regularly offers live webinars that reach up to 10,000 people at a time -- by organizing in-person meet-ups. These act as opportunities for people to come together in the real world.
"People are building a life around exploration and it helps to give others actionable steps on how they can achieve this," Wilson says.
"That's important, especially for folks who might just be starting their travel journey from the beginning."
While Travel Noire has organized its own curated trips in the past, this isn't an area of focus at present.
Its main mission is to make travel more accessible for people of color.
"To sum it all up, what we're doing is changing the face of travel," White says.
"I think that being able to see someone that looks like you say 'this is a great experience' both inspires and encourages you to go for yourself."